Gerakini is a village in the Halkidiki peninsula in Central Macedonia, Northern Greece. It has been the port of nearby Polygyros, the capital of Halkidiki, ever since its settlement. Its beaches attract thousands of tourists and holiday makers during the summer. It has the largest magnesite deposits in Northern Greece.

Gerakini lies on the gulf of Torone, between the two fingers (smaller peninsulas) of Kassandra and Sithonia, southeast of Thessaloniki. 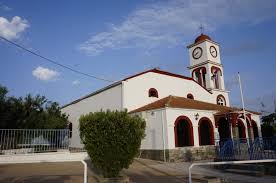 The middle part, the real village of Gerakini, has the church of patron saints Agioi Theodoroi (dedicated to two saints having the same name Theodoros).

There are several olive oil mills in the area (in Polygyros, Kalyves Polygyrou, Olynthos, Ormylia) and companies for green table olives preservation. Olives are harvested while green for table olives in September and, mainly for olive oil, when black in November and December. The language spoken is the Greek dialect of Halkidiki, as spoken in its capital Polygyros.

Gerakini as well as nearby Kalyves Polygyrou were settled by farmers from Polygyros in the late 1800s and early 1900s, ever since belonging to its municipal administration as municipal units.

Until the 1960s there was the sole olive oil mill of the area on the central beach owned by the Haji Osman family. There was also a police station in Gerakini for very many years in the past. During World War II there was the Administration Center of the area, which, among other activities, extended the main dock, whose remains still extant, for vessel freights for use by the occupying German army. Divers and amateur fishers used both parts of the dock for diving and fishing. There was also a lighthouse on the right side of the main dock.

Gerakini ‘s seaside is one of the main vacation resorts of Halkidiki and attracts thousands of visitors from April to October. It can be reached by bus or car from Thessaloniki via Polygyros or Nea Moudania, or by sea by passing through Potidaia’s canal, or by the primary opening between the two fingers of Kassandra and Sithonia. It has a mooring bay on the Aegean Sea.

This widget will display a newsletter form. You can configure your newsletter options in the theme settings under the Appearance menu.

Sunday Summer Resort The complex Sunday Summer Resort comprises 4 studios (2+1 persons), 2 Studios (3 persons) and 6 Apartments (3-5 persons) fully-equipped and furnished, decorated with elegance and style, comfortable and functional. Located on a breathtaking bright-green stretch of land, near the sea-shore, it is a fascinating microcosm of the natural wealth of Halkidiki Greece. Within the span of 5000[…]

Decauville Hotel & Villa We welcome you to Halkidiki, a blessed region with great history through the centuries, many traditional villages and unique coasts. Whether you want to enjoy relaxing moments or you have a more adventurous mood, Halkidiki is an ideal destination combining natural beauty with high quality accommodation[…]

Hotel Estelle Estelle hotel is a family business in the beach of Gerakini, in the centre of Halkidiki, it was built with a lot of care and passion and opened in order to offer to its visitors comfortable stay and relaxing holidays. It is located only 20 meters away from[…]

Mount Athos  Mount Athos is the spiritual capital of the Orthodox Christian world, consisting of 20 monasteries and approximately 2000 monks. Mount Athos is situated in the entire third, eastern and most beautiful peninsula of Halkidiki, called the peninsula of Athos. It is the only place in Greece that is completely dedicated[…]